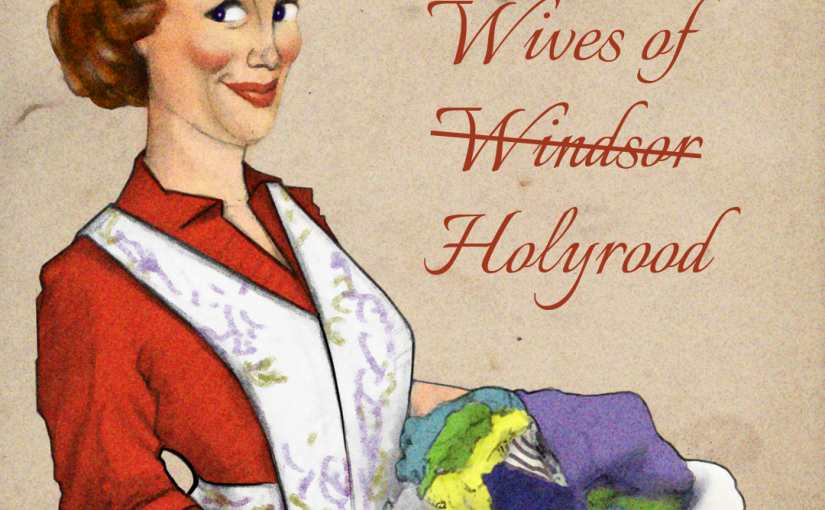 The Merry Wives of Holyrood by William Shakespeare

An uproarious tale of marriage, mischief, jealousy, lies, and laundry.

Set in and around Page’s Steamie on the Windsor Estate in 1950s Edinburgh, Falstaff woos two women in an attempt to swindle their husbands and regain his squandered wealth. The wily wives see through him, however, and plot their hilarious revenge. Meanwhile, Anne Page is pursued by two unlikely suitors, each one approved by her respective parents. But she prefers another.

Will true love prevail? Will Falstaff get his comeuppance and mend his ways? And will Ford ever accept that wives may be merry yet honest too?

Director Angela Harkness Robertson made her directorial debut with an award-winning production of Caryl Churchill’s A Number at the SCDA One Act Festival 2018. With The Merry Wives of Windsor she is stretching her classical wings with one of Shakespeare’s lesser performed comedies, bringing it slightly more up-to-date by setting it in an Edinburgh public wash-house in the 1950s.

Harkness Robertson says,
“Watching a production of Tony Roper’s ‘The Steamie’ in 2017, I had a lightbulb moment: ‘The Merry Wives of Windsor’ would be great on that iconic set! I wasn’t familiar with the play before I saw it, so have no idea where the inspiration came from but once it struck me it was hard to shake. I reread Merry Wives that night and was convinced. It is one of Shakespeare’s most accessible pieces: the language is mostly prose, the non-stop action speaks for itself, and everyone will be able to identify characters in their own circles. Inexplicably it’s one of Shakespeare’s least performed plays; but I can’t wait to share the hilarity of this portrait of humanity, which delightfully pokes fun at all our vices, virtues, and vulnerabilities.”

In addition to a six night run at the Edinburgh Festival Fringe, EGTG’s rendition of The Merry Wives of Windsor has been selected to be performed at The Dell in Stratford-Upon-Avon as part of the Royal Shakespeare Company’s 2019 summer season of free open air theatre. There will be two performances at 12 Noon and 3pm on Sunday 1st September.

Harkness-Robertson has created a formidable cast, with some of EGTGs most established members set to bring the Bard’s words to life at the Fringe and in Stratford. Hilary Davies and Helen Goldie are joined by newcomer Shea Gardner to foil Chris Allan’s unfortunate Falstaff, while Chris Pearson’s Caius vies with newer members Colin Povey and Alan Sunter to win the affections of Alice Pelan’s Anne.

3 thoughts on “The Merry Wives of Windsor”